What we crave: Meaning, Belonging & Self-Expression 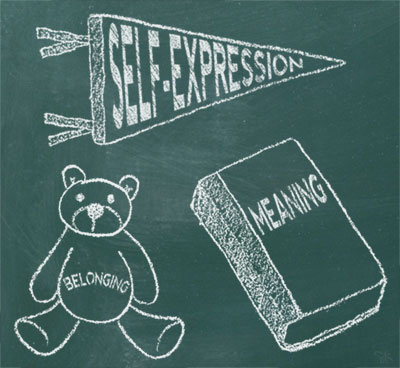 We've been hearing about irony's imminent death since 2001, although so far it hasn't happened. But after listening to The Takeaway's recent show titled "The End of Irony?" I think popular culture is finally due for a resurgence in sincerity.

Right now, Boomers and Gen-Xers control much of the media, but the voice of Millennials is rising. The Millennial generation has been raised in an irony-rich environment created by Boomers, embraced and extended by cynical Gen-Xers. Amid this cynicism, Millennials have been told that the end justifies the means: get good grades and a degree, check off the boxes, who cares what you actually learn. All their lives they've been awarded meaningless trophies and ribbons to boost their self-esteem. They've watched religious leaders become increasingly judgmental and wealth-obsessed.

Millennials have embraced the modern equivalent of motivational posters, images paired with inspirational quotes shared over social media. They've made My Little Pony: Friendship Is Magic with its message of simple, optimistic sincerity a surprise hit. Folky-sounding music full of heartfelt emotion, like Mumford and Sons', is popular again. Millennials are just beginning to hit their 30's in force, just beginning to rise to positions of power outside of the internet niches where they currently hold sway. As they begin to have more influence over larger swaths of mass media, expect more focus on meaning and the search for it.

What the Other Generations Want

Baby Boomers, growing up in a conformist society, learned to value self-expression and individual achievement. Look at the movie heroes they created: Indiana Jones, James Bond, Superman. These are men who won't let the rest of the world tell them what to do, they go their own way. Look at restaurant menus and grocery store aisles since Boomers ascended to power: everything comes in a dozen different varieties, everything is customizable, everything is "create-your-own."

Gen-Xers grew up in a culture where divorce was both new and increasingly common, and the civic infrastructure was increasingly corrupt, mistrusted, and crumbling. Left to fend on their own, they grew to crave family and a sense of belonging. As an example, look no farther than the recent Avengers movie. Would Boomers have created a film where the world's most powerful superheroes form a team and become friends? Gen-Xers invented social media, using technology to connect with other people.  They turned workplaces into substitute families, shunning formality and bringing socializing into the office through game rooms and planned group outings.

Get Ready for the Sincerity Deluge

This isn't to say that Millennials don't appreciate sarcasm and can't enjoy cynical humor (e.g. Rage Comics). There will still be plenty of that to go around for a good long time, especially with Gen-Xers replacing aging Boomers. But anyone who wants to connect with people 30 and under needs to include a kernel of meaning in whatever they do, a sincere message that will connect with audiences and tell them it's OK to think, feel, and wonder.