I was inspired by this wreath I saw on Pinterest and decided to make my own. 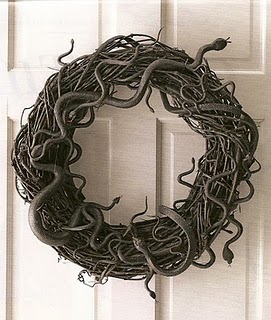 But after hot-gluing the plastic snakes on the grapevine wreath, I thought it actually looked pretty good unpainted. Then my husband had the idea of gluing on all the cicada skins my boys had collected. I really like the end result. It's a little creepy from far away, really creepy up close when you notice the cicadas. 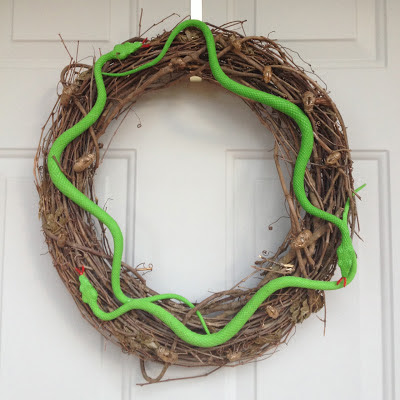 Like the original blogger who posted the top picture, I also had trouble finding large plastic snakes. I was able to find small ones at Dollar Tree, and I finally found the large ones at Wal-Mart in the toy section. The wreath and the spray paint that's supposed to adhere to plastic (which I didn't use) are from Hobby Lobby.

I bought five snakes, but only ended up using three because my boys wanted to play with the other two, and I didn't have the heart to take them away.