I've been thinking a lot about the changing face of education lately. I was going to write a post about a conversation I had with a friend discussing subsidized remote schooling in South Carolina. Then I read this piece by Seth Godin about how to improve public education in America, and I was going to post about that, too.

As part of these posts, I imagined writing a news article from a future where all education in South Carolina has been privatized. I was going to write about schools where children are warehoused and barely educated because the companies running them want to maximize profits and don't want to pay for real teachers. I was going to write about a single mom, upset that her son is learning nothing and constantly getting in trouble, taking her case to the media because she has no other educational option in her small town and the papers she signed when her child entered the school mean she can't sue for negligence; mandatory binding arbitration is her only option.

While I was imagining this future nightmare scenario where the unethical and greedy siphon money from the public to line their own pockets at the expense of the children they're ostensibly educating, it's already happening in Florida: Controversy over Scientology influence clouds future of Pinellas charter school.

This is why simply privatizing education is not the answer. This is why we need to make sure that the primary goal of the people running American schools is educating the next generation, not indoctrinating future cult members or enriching their shareholders.

What Can We Do?

There is some good news here: there's still time to make the future a good place for our children, for all children in South Carolina and in America, for that matter. We the people stopped Howard Rich's push to defund public education in South Carolina four years ago. We can stop groups like ALEC from doing the same now. Our lawmakers are bought and the corrupting influence of money is everywhere. It's up to us, to you and me and ordinary people everywhere who have a real stake in the success of public education, to band together and preserve it.


Read Seth Godin's Stop Stealing Dreams (PDF, other formats available via link above), and think about how public education could be not just better, but great.
Posted by Susanna at 2/28/2012 No comments:

Two more AIA doodles, drawn during my second-to-last semester there.

I probably drew this right before lunchtime. 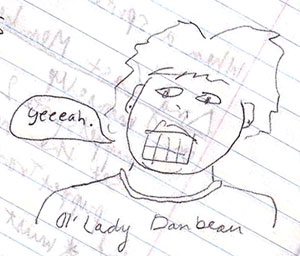 You know how some images stick in your head and stay with you forever? Ol' Lady Danbeau is one of those. Yeeeah.

The Guppy from Philadelphia

The last time I visited my parents, I went through a stack of my old notebooks from high school. I found all kinds of amusing and interesting doodles, poems, and ephemera, so I asked my mom to please mail the notebooks to me.

Some of the doodles will be appearing here in the future, but for Valentine's day I thought this poem (written in my pre-calculus notebook during my junior year at York) seemed appropriate. I am amused by the effort I obviously put into finding rhymes for "Philadelphia."

I was sitting with a gnome drinking tea from a cup
When this squirmy little brown thing came swimming up.
Said, “I’d like to have a drink with the elf and ya,
“I’m a guppy from Philadelphia!

“Now there’s something that you ought to know about me.
“I’m not at all romantic but I do love tea.
“If I drink all yours I’ll only blame myself, uh huh.”
Said the guppy from Philadelphia.

So he drank all our tea and he ate all our chicken.
This made the gnome mad and he started to kick him.
Then he started to beat him with an umbrella.
Poor guppy from Philadelphia!

Well, he knew he was beat so he slithered away
And we’ve all been more romantic since that day.
Each time I drink tea I think of that fella,
That guppy from Philadelphia.

Here's a nifty audio version I made (set to reggae loops via Magic Garage Band) so you can hear the tortured meter: The Guppy from Philadelphia

I'm guessing that this was probably written in the spring of 1990, long enough after my first serious boyfriend and I had broken up that I was again interested in finding romance. Here's more information about my inspiration for this weirdness: Agape, Eros, and Philia: Greek words for love.
Posted by Susanna at 2/14/2012 No comments:

Today I have more scans from my AIA class notes. 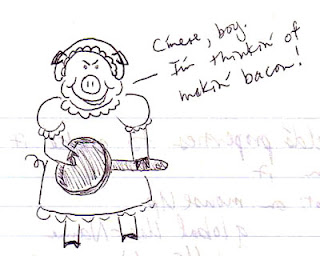 I don't know what I was thinking of when I drew it, but I find this image rather disturbing. 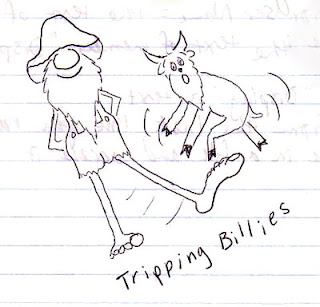 This is what that Dave Matthews song always made me think of.

Who Can Be a Poet?

The other day on NPR's Morning Edition, I heard a story about the death of Nobel Prize-winning poet Wislawa Szymborska. The journalist read some of her poems; they made my jaw drop in shock and my eyes brim with tears.

Szymborska wrote about scientific things, abstract thought, other worlds created in her imagination. I had no idea that poetry about such things could be worthy of publication, let alone a Nobel Prize. I've read a lot of poetry, but mostly the classics, the stuff you're expected to read in high school and college survey courses. I thought poems had to be about human nature and gritty reality to be taken seriously.

The Mountain Goat was a student-published literary journal at my college. My friend Catherine and I tried many times to get our poetry and short fiction accepted for publication by The Mountain Goat. We never succeeded. I thought our poems didn't have enough angst and big words, she thought they didn't have enough sex. We never found out why they didn't accept our submissions, but those rejections definitely had an effect on how I thought of myself as a writer.

I decided that my poems were probably just too weird, and that I just wasn't a very good poet. I gradually wrote fewer and fewer poems, stopping completely some time in the late 90's.

But I never stopped writing songs. Really, songs are just poems set to words. Nobody could tell me that I didn't write good songs because I knew in my soul that my songs were good (maybe not all of them, but a healthy majority). I'd been writing songs since I was five years old and studying music for just as long. I accepted that I would never be any kind of poet and just kept on writing songs when the inspiration struck me.

And now, all these years later, I find out that my thoughts aren't too weird for people to read. Other people may also be fascinated by the complicated and esoteric things that interest me. There's no reason to rein in my creativity: the world is big enough to let it run free.

I hope to write some poems soon about the internet and nuclear technology and things like that. (I once wrote a song about synapses in the brain - I really ought to resurrect that one.) In the meantime, here's the song I wrote about all my rejections from The Mountain Goat. When I have time, I hope to record it so you can hear the tune.

My Words Are Simple

My words are simple
Because I have to understand what I say.
Some argue that's not right for a poet.
I will sing anyway.

No great ideas,
Just the feelings that I have at the time
Are turned into words on some paper:
A song that is mine.

Perhaps the meter
Is beating time in my head alone.
If you throw up your hands and ignore me
I can sing on my own.

Jealousy, anger, desire and pain,
Joy and longing and love:
These are emotions I have in my brain,
Real feelings that I know of.
(And I did that on purpose.)

I let one Friday get by without a doodle. I can't let that happen two weeks in a row!
So here are a couple doodles from a fairly recent meeting (note the date in the first image). I apologize for the terrible quality of the cellphone pictures edited with GIMP. 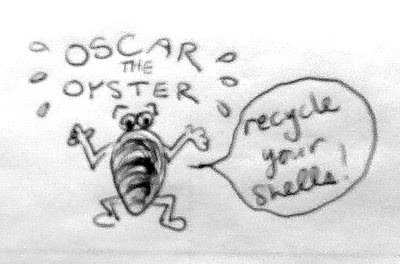 I think the SCDNR should make Oscar their mascot.