My brother asked me to make this cartoon, inspired by an article titled, aptly enough, "The Regulation Monster." 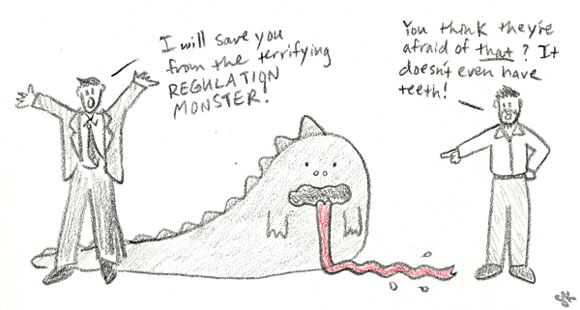 The previous drawing he's referring to is my sketch of the Confidence Fairy: 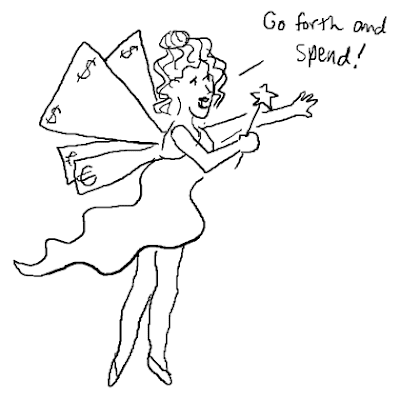 Updated: I've put both of these images are under a Creative Commons Attribution license. That means you can use them however and wherever you want, as long as you give me credit. Thanks!

This work by Susanna King is licensed under a Creative Commons Attribution 3.0 Unported License.
Based on a work at blog.superflippy.net.
Posted by Susanna at 6/30/2012 No comments:

These are a bunch of little creatures I dreamed up during freshman Latin class. I called them "twerps." 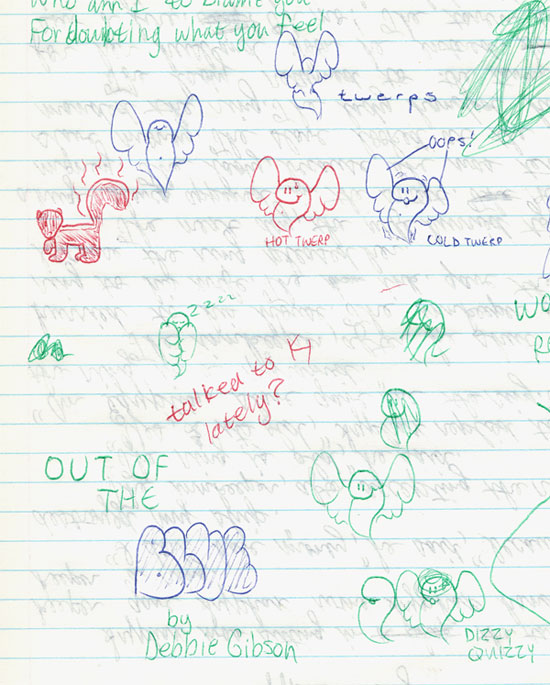 Extra bonus points if you can guess which 80's song the lyrics at the top of the picture are from.

For June's collage, I searched Flickr's CC-licensed photos using the word "reckoning." I ended up using four photos from the results: the singer is from rjforster (the band's name is Threshold and they're pretty good if you like metal), the receipt is from Micheal Foley, the stripes come from a Second Life screenshot by TORLEY and the speckled pattern was generated from TORLEY's drawing of a door.


This is one of those rare images where I had a design in mind from the beginning and attempted to execute it. I wanted to have a wavy, bright blue image of the singer superimposed over the original photo, like an old TV with bad reception.

I went through several steps to create each component: the receipt, the stripes, the wavy image, and the grainy photo in the background. Each involved a lot of trial and error and experimentation, so I'm not going to describe the details of how I made the whole thing because, frankly, I don't know if I can even remember everything. Instead, I will just describe the successful steps that eventually led to the creation of the wavy blue picture of the singer.

First, I copied the singer photo layer and used the Artistic > Cutout filter to reduce the detail. Image > Adjustments > Posterize will do this, too, but the Cutout filter also simplifies the edges of shapes.

To create the irregular stripes, I filled a layer with a plain horizontal striped pattern, then used the technique described in my distressed type tutorial. I merged the jagged stripes with a copy of the singer's photo and used the Distort > Wave filter to make it wavy (I put the horizontal setting at 1% to get waves that only went up and down). Edit > Skew let me adjust the angle of the image. I then selected all the black areas with the Magic Wand and made a layer mask from the selection.

That gave me the basics of what I was looking for, but it didn't interact with the background photo the way I wanted it to. So I loaded the layer mask as a selection, then expanded and feathered it (actually, I think I had to use Select > Contract to get the selection I wanted even though that doesn't make any sense). I then copied the wavy blue layer and used my modified selection as a new layer mask. This created stripes with more space between them.

If you're curious about any of the other components of the picture, just ask and I'll do my best to answer.
Posted by Susanna at 6/26/2012 No comments:

These doodles from my 9th grade Latin notebook were so intertwined, I decided not to try and separate them. Click on the image to see a bigger version. 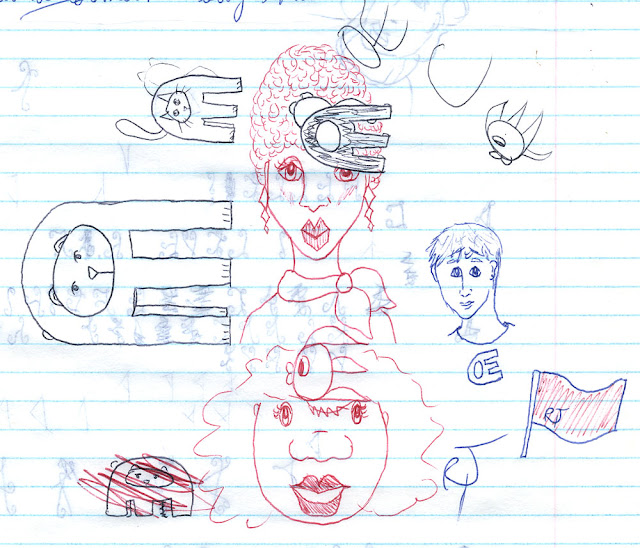 These doodles are from my freshman Latin notebook. 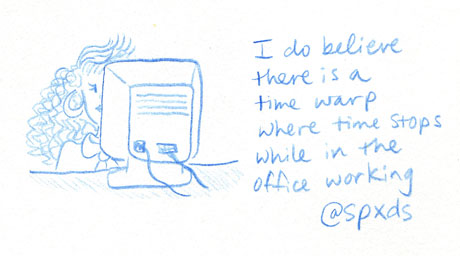 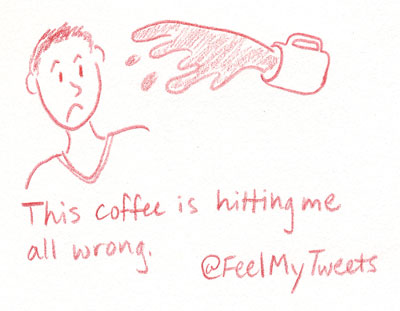 My friend Jordana posted a link to this article: 9 Furniture Staples Going Extinct
Here's Yahoo's list of furniture on its way out:


I'm not going to argue with some of these, but I do have to wonder where the author of this list is shopping that she has trouble finding folding lawn chairs. Walgreens, Wal-Mart, half the roadside souvenir shops along Highway 19 near Myrtle Beach - they're definitely out there. I would also like to point out that the "modern" alternative to the futon she touts is nearly identical to my parents' Danish Modern sleeper sofa from the 70's.

Anyway, this list got me thinking about how much "extinct" furniture I have in my house. We mainly decorate our home based on practicality and price, so we do have a lot of stuff passed down from relatives or picked up at bargain sales and antique malls (did you know, solid wood antiques can be cheaper than brand new composite furniture?).

From the list above, I have clocks (even a cuckoo clock!), coffee tables, folding lawn chairs, a china cabinet, and bookcases. We also have the following dinosaurs which were probably too obscure to make the list:

I know this doesn't look like your typical music stand. It's a very old-fashioned one that used to belong to my husband's great-aunt. The slots are for holding sheet music and music books, and you can also put music on top to play it. Right now, it's holding my messy piles of sheet music and my husband's LP collection.

What other pieces of furniture ought to be on this list? Do you have any endangered furniture species in your home? Leave a comment and let me know!
Posted by Susanna at 6/11/2012 1 comment:

A Tribute to Mrs. Grossman

I went to my stash of old notebooks to look for more margin doodles. I hit pay dirt with two notebooks from my freshman year of high school, but before I post any of the material inside the notebooks, I want to show you the covers. (Click to see full-size images.) 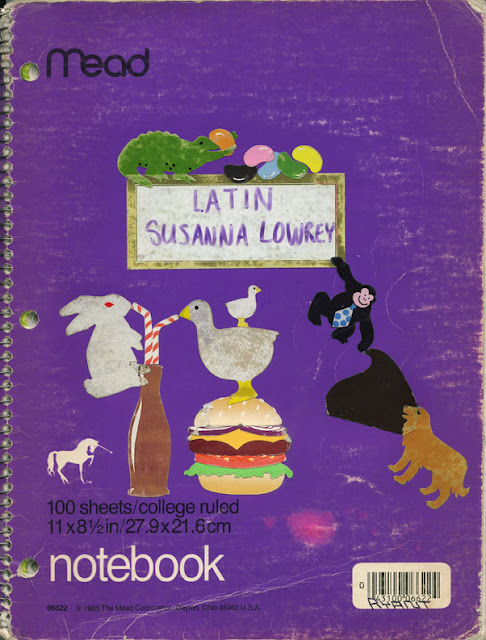 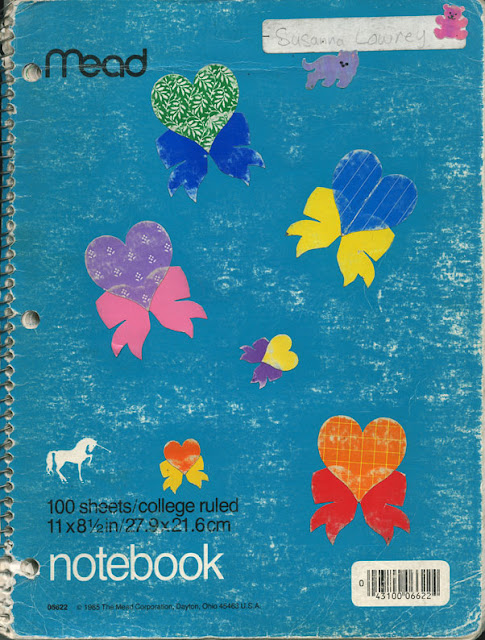 Like many girls in the 80's, I collected stickers. And no stickers were as highly prized as Mrs. Grossman's. Like any good sticker collector, I displayed my stickers in a photo album still on their backing.

But by the time I reached high school, that fad was over. I decided it was OK to actually use my precious hoard for its intended purpose. So here's what I made with my favorite Mrs. Grossman stickers. Looking at these brings back all kinds of happy memories. (I'm sure I never thought I'd say that about my high school Latin and Geometry notebooks!)

Random tweets from people I follow, taken out of context and illustrated. 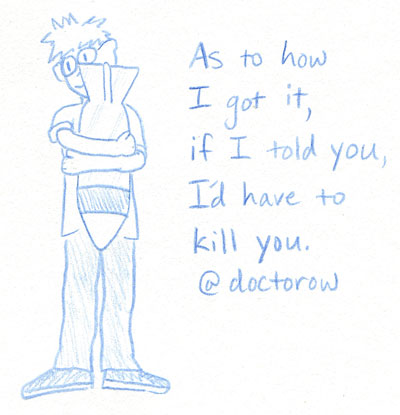 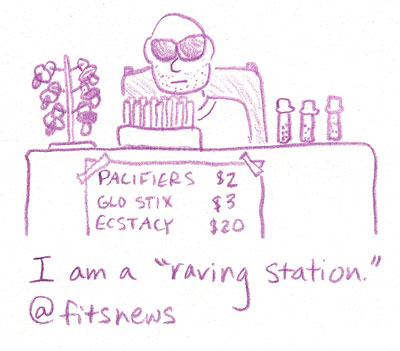 If you look deep into the depths of my web site's archive, you will see a section titled Desktop Pictures. I began creating these collages in Photoshop back in 2002, though it wasn't until January of 2003 that I began to use the single word or phrase searches that I've stuck with since. You can see more recent creations in my DeviantART gallery.

I used to use Google Images, but now I'm trying to be a good netizen by only searching Creative Commons-licensed images on Flickr. Unfortunately, this cuts down on the number of serendipitous screenshots and gif diagrams I get, but the photo resolution is better, which has become important as screen sizes have increased and I've made my collages bigger.

So, here's my formula:

I had some great photos for this collage, but I was having trouble putting them together. Then, I read the article Breaking Bits in Pretty Ways on BoingBoing and got inspired.

The background is a photo of some shopfronts by Nick Findley. I used the Cutout filter with the edge simplicity up pretty high to make it flat and angular. Then I adjusted the colors until the green gate stood out.

The letter Y was photographed by Monceau. I masked out the background and used Add Noise with a fairly high number. Then, I made a copy of the Y cut out, used Mosaic with a cell size of 4 to make it look pixellated, and adjusted the color so it matched the door. I set the layer blend to Color Dodge and gave the Y below it an opacity of 33% so the background showed through.

The wing was probably the toughest part. I cut it out of a photo by Travis S of a girl on a beach holding a dead bird's wing. After removing the background and the girl's hand, I upped the contrast and took it from color to black and white. Using black and white as my colors, I applied the Graphic Pen filter. Finally, I set the blend mode to Screen so only the white showed up, and added a layer filled with one of the grays from the background at 27% to keep the wing from being pure white.

I think there are many ways to interpret this: "Wingy," "Birdy," "Fly why?" I haven't decided myself. But I'm really happy with how the final image came out, and I think it definitely looks appropriately disjointed.
Posted by Susanna at 6/06/2012 2 comments: 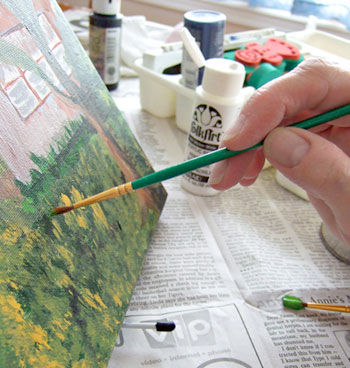 Yesterday, I went to a funeral for Brenda Douglas. She was a wife, mother, grandmother, great-grandmother, and active in the church and the community. Beyond that, she was also an artist and photographer, and had a long career as a court reporter.

In his eulogy, our rector said several times that Brenda "lived her life to the fullest." This is clear from the legacy she left: her family, her art, the good she's done for people around her.  I hope I can claim half as much accomplished in my life when my time comes.

I don't want to live vicariously. As long as I am alive and able, I want to experience life for myself, to live each day to the fullest.
Posted by Susanna at 6/05/2012 No comments:

The notebook I took these from was labeled "Pre-Calculus Review." I'm guessing it was from my senior year of high school.

Just a bunch of random faces that were all on one page together. I kind of like how the equations on the other side of the page bleed through. Notice how they all look scared or upset except for the two skeevy-looking guys. 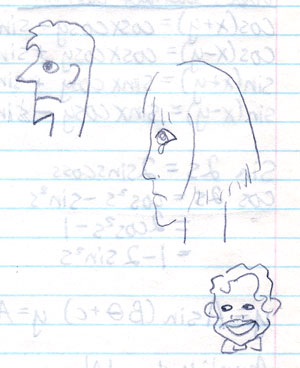