Why I Didn't Get The Catcher in the Rye

My sophomore year in high school, I read The Catcher in the Rye

. I considered it just another slightly dull Great Work of Literature that American high schoolers were required to read in order to be considered properly educated. All I took from it was that Holden Caulfield had gray hair and an incomprehensible relationship with his landlady, and that the title of the book was too subtly meaningful to make sense to me.

I checked off that box and moved on. Years later, I heard peers of mine mention how inspirational Catcher was to them as teenagers. "Did they read the same book I did?" I wondered. I heard people praise Caulfield's disdain for "phonies" and admire his cavalier attitude toward authority and refusal to do what was expected of him. None of that came across when I read the book. I just saw a narrative of an odd man doing random things. The characters and setting had absolutely nothing in common with me or my life.

At fifteen years old, I was an avid reader. (Still am, in fact.) My favorite book at the time was Watership Down by Richard Adams, but I also tore through V.C. Andrews' entire pre-mortem oeuvre, anything by Ray Bradbury, and Anne McCaffrey's Dragonriders of Pern

series. These books are all fantasy or have fantastical elements, but they spoke to my reality. True, I am not a rabbit or an orphan; I never fought evil fascist overlords or rode a dragon. But in those books, despite the superficial differences between their characters and settings and my ordinary suburban life, I found a lot of common ground. I wasn't struggling with authority, but I was struggling with emotions. I didn't need to be told it was all right to rebel - I already felt like a quirky outsider, and I needed to hear that there was strength in being unique. I didn't want to drink, smoke, or have sex, and I didn't really fit in with all the kids who were into that sort of thing. I just wanted to find my compadres, my friends, the people who knew me and loved me for who I was.

One's experience with a book is colored by one's experiences in life. When I read The Catcher in the Rye, I have to suppose I was in a very different place than the kids who found it meaningful. For that reason, I don't think the fact that it left me cold makes me an ignoramus, any more than it makes J. D. Salinger any less of a great author.
Posted by Susanna at 9/29/2012 2 comments:

Continuing with doodles from my freshman Latin notebook, here's a visual hint for how to pronounce the Latin word "tubicines" (trumpeters).


Another mess o' doodles from farther down the same page. 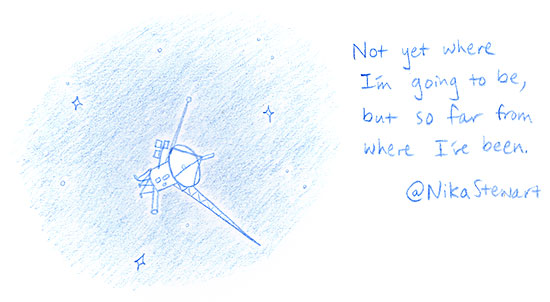 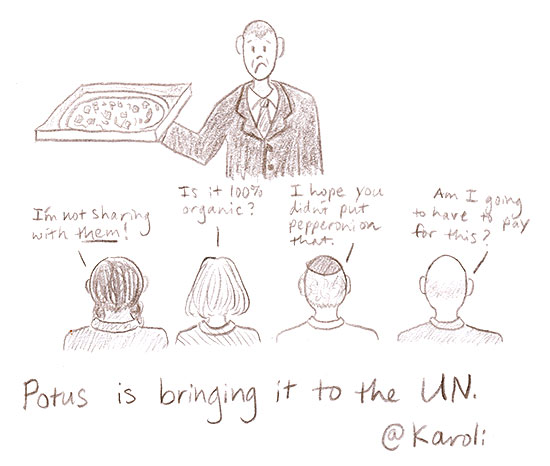 Cake Decorating by the Book

I like to make my sons' birthday cakes myself. While I'm far from an expert decorator, I can pipe a passably straight line of buttercream. I try to keep the designs simple while still giving my boys a cake that they'll enjoy.

For my younger son's first birthday, I got my inspiration from his favorite book, Thank You Prayer

. I read this little book to him before bed every night. The pictures were simple and worked well on a sheet cake. 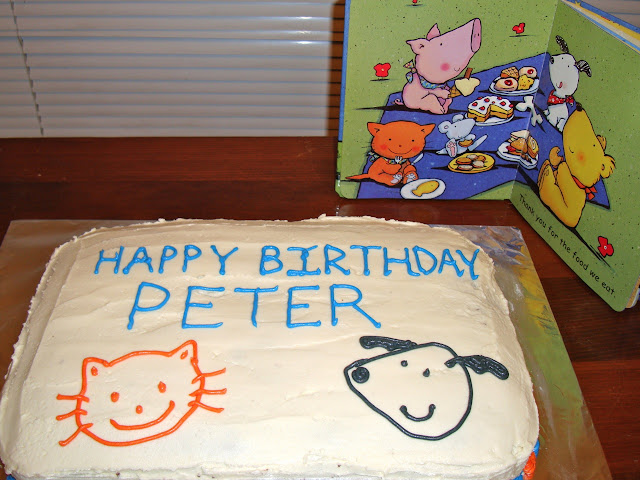 I copied the design onto the plain, frosted cake using a toothpick first. That way, if I messed up, I could just "erase" it with a spatula. Then I piped the frosting over the top of the lines I'd drawn. Voila! A cute cake with one of my boy's favorite things on it.

Email ThisBlogThis!Share to TwitterShare to FacebookShare to Pinterest
Labels: DIY

This image gave me a start when I came across it in my old notebook. 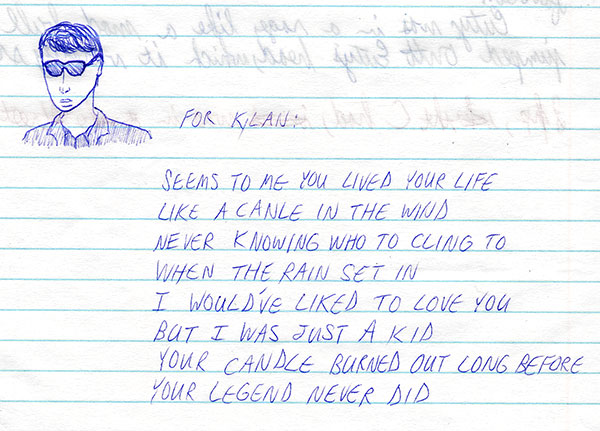 Kylan, the guy I had a crush on my freshman year, ended up marrying his high school sweetheart and joining the navy. He was killed in Iraq in 2003. He was incredibly smart as well as just an all around good guy. The world is a better place for his having lived, and I know his family and friends miss him terribly.

I don't know why I decided to write the lyrics from "Candle in the Wind" next to his picture all those years ago, but it seems sort of appropriate now.
Posted by Susanna at 9/21/2012 No comments:

Selected tweets from people I follow taken completely out of context.
(I was horribly sick last night, so yesterday's post gets posted, post-dated, today.) 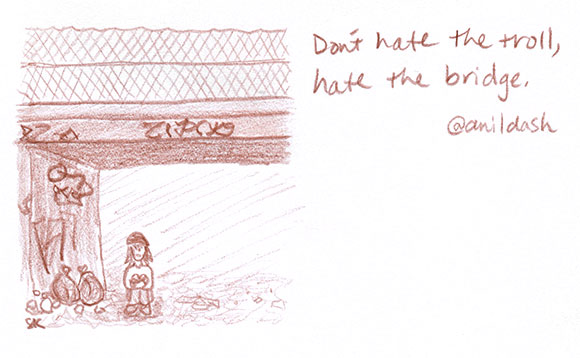 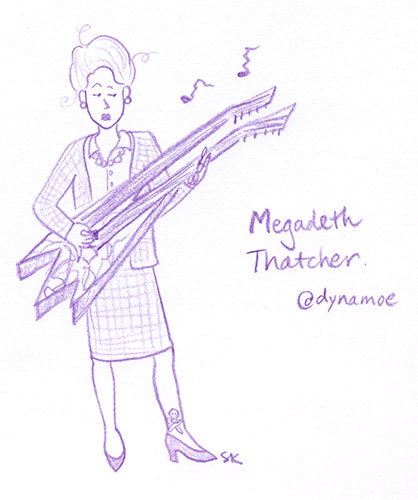 I like playing Draw Something, when I can get my husband or kids to relinquish the iPad for a few minutes. Here are a few of my favorite drawings I've done. 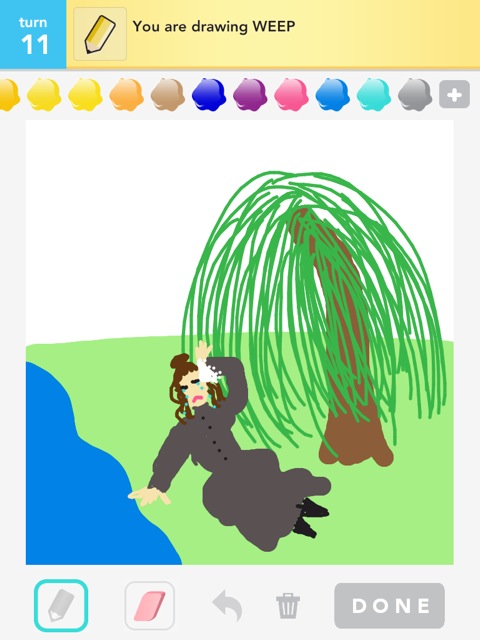 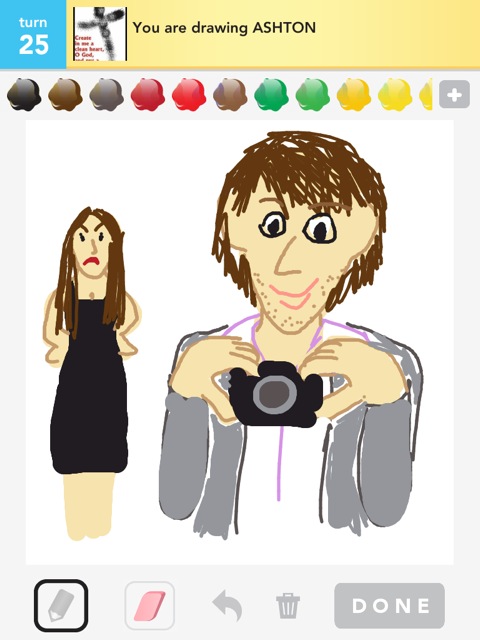 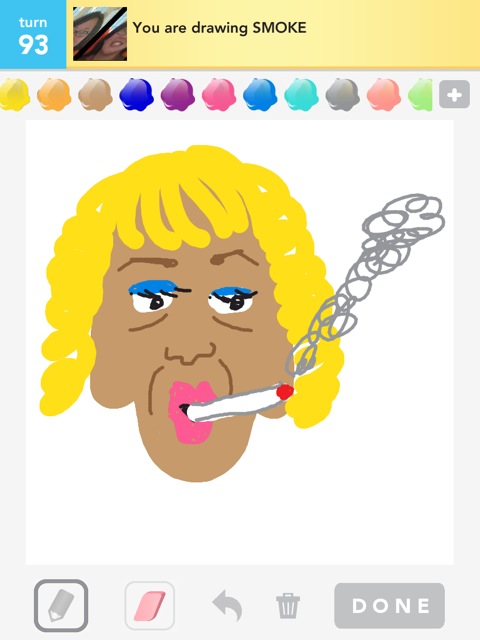 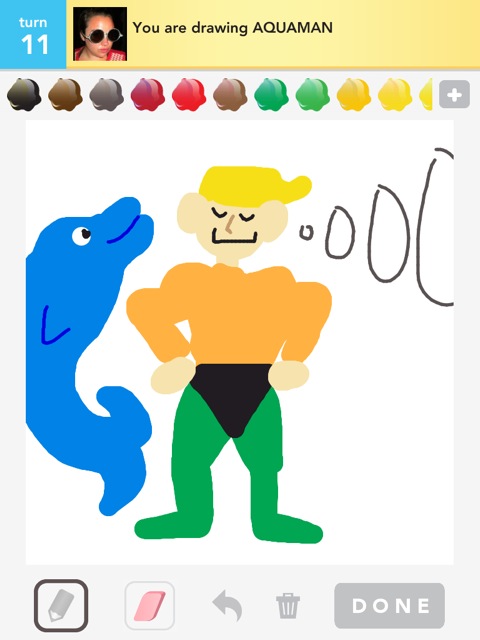 Email ThisBlogThis!Share to TwitterShare to FacebookShare to Pinterest
Labels: doodles, Draw Something 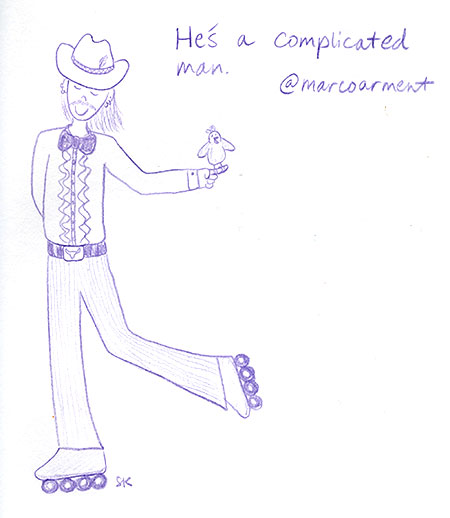 More from my freshman Latin notebook, where I'm trying to figure out how to pronounce "Eutychus."

When I read nursery rhymes to my boys, I wonder why they all seem to have been written 200 years ago. They're just little rhymes about current events and daily life; there's no reason we can't supplement the classics with our own creations.

With that in mind, here are a couple of "modern" nursery rhymes I've written. 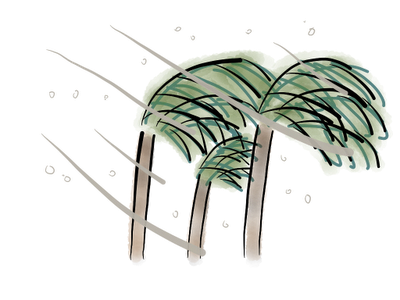 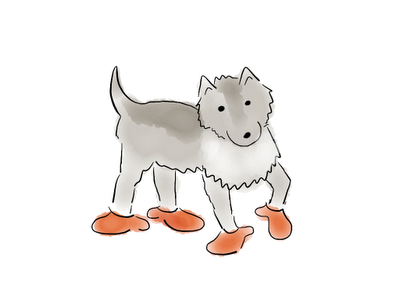 The smart little wolf
Will hide in a shrub
And wait to pounce
'Til he sees his grub.

The smart little wolf
Will bury his bones.
He hunts in a pack
But he eats alone.

The smart little wolf
Wears mittens on his paws
When he goes outside
Before it thaws.
Posted by Susanna at 9/12/2012 No comments:

the best thing about learning new stuff is that you feel a little bit humble at first and then its: AHA! i can totally rock this \m/
— mortendk (@mortendk) September 10, 2012 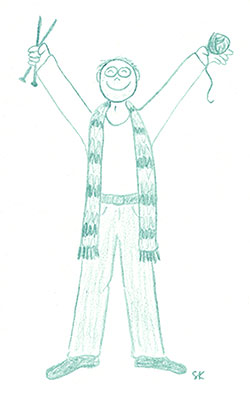 Girly doodles today. I did promise not to post any of the cruel caricatures of my classmates, but I feel all right about showing you the flattering ones. 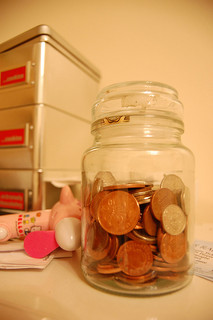 The other day I read the post "Slightly rewarded (slightly punished)" on Seth Godin's blog. He points out that many bad habits hurt us in such small increments that we don't notice their deleterious effects until a lot of time has passed. By then, it's harder to kick the habit and too late to recover whatever it's cost you. He writes, "One way to change behavior is to keep track of how often these little events occur, because seeing them lined up on the windowsill might be enough to change your mind."

I have a bad habit of playing video games on my iPod when I should be doing other things. I've tried many times to break this habit, but I've never been successful. Seth's article gave me an idea for how to quit.

Starting yesterday, every time I procrastinate by playing games I charge myself a penny a minute. Not much money, I know, but the kicker is what I have to do with the money I'm fining myself. I'm going to make myself donate it to Karl Rove's Super-PAC. Frankly, I would feel better flushing the money down the toilet than giving it to people who are just going to waste it on nasty political ads. And that's what has kept me from picking up the iPad several times in the last couple of days. I think to myself, "If I play Peggle, I have to give more money to Karl Rove." For me, that's quite a deterrent.

It turns out that even though superflippy.net itself was created some time around 1997 or so I didn't create my first blog until 2001. When I updated the content on my original site, I just deleted whatever had been there before, so there was no time-based organization to it.

In 2001, I started a blog using the Blogger platform. It was called "Day by Day" and it was my own commentary on the Bible readings from Forward Day by Day. I kept that blog up until 2005. I never intended to quit, I just took a break and never got back to it. The format evolved from simple commentary to drawings with commentary.

You can see the list of archived Day by Day posts here. I don't think the first few are very interesting, but it gets a lot better in April 2002 when I decide to start adding drawings to my posts.

But it's not until May 2004, only a year before I stopped blogging, that I settled into the format that I think of as Day by Day's mainstay: a hand-drawn doodle coupled with a pithy reflection on the day's selected passages.

It's funny how I remember my first blog as years of nearly uninterrupted posts with the format perfect from the start. By looking back, I can see that there was a lot of trial and error, a lot of gaps and false starts.

I'm glad to discover it took me 3 years to develop that blog. It makes me wonder what Free Ideas could become next year or the year after. It makes me hopeful about the future.

Recipe for my found image collages:

This month's word is "Weather." Since hurricane season begins in earnest in August, I find myself checking the weather a lot more often this time of year. The weather also tends to be the focus of the news when storms begin to affect the southeastern U.S. 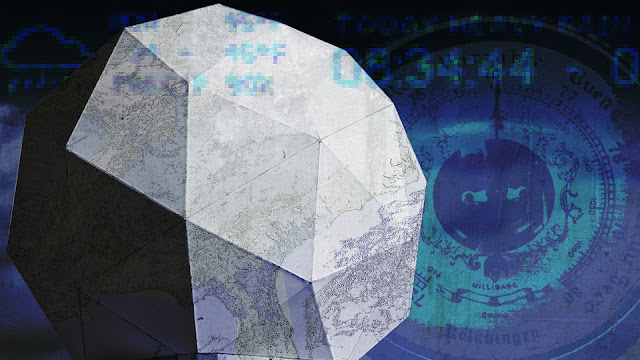 Credits: The map photo inside the sphere is from NASA Goddard Space Flight Center, the sphere itself is from Donald Macleod, the sky in the background is from Kent Wien, the pixelated text in the front is from a photo of a digital display by Rod Begbie, the barometer is from Jennifer Woodard Maderazo, and the texture over the top of everything is from Darren Hester.

After last month's mistake, I was very careful not to delete anything. All the layers - copies, experiments, whatever - are still in the file. So now I can show you my first stab at the collage. 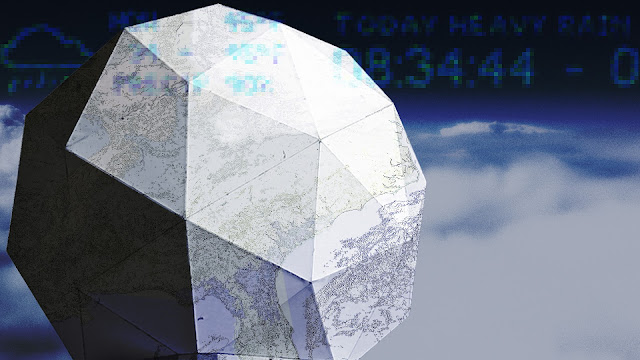 I liked it, but thought it needed something more, so I added the barometer and the texture. I used Image > Adjustments > Posterize filter to simplify the barometer photo, then Threshold to make it black and white. I did two different versions of the barometer with Threshold, then set one image above the other at 50% opacity and merged the two. I think the result looks like something from the old early-90's Mac games. 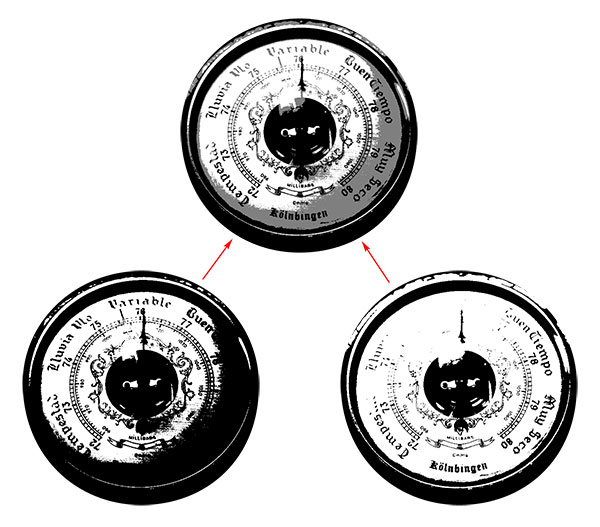 So that's my August collage. And now that month is over, and it's time for me to find a word to illustrate for September!
Posted by Susanna at 9/01/2012 No comments: