Two more random tweets from people I follow taken out of context and illustrated. 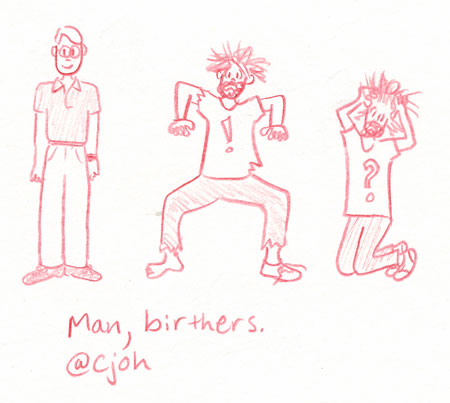 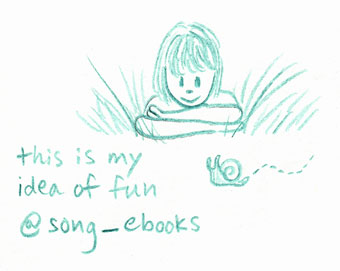 From my high school English class notes, junior year. (I think that was Mr. Murray's class.) All these drawings of girls were on the same page, amidst the vocabulary words. Which is your favorite? I'm partial toward #2. 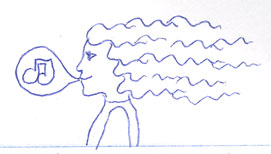 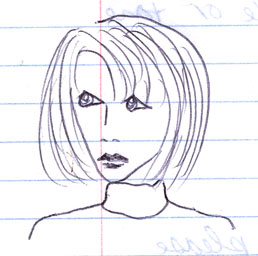 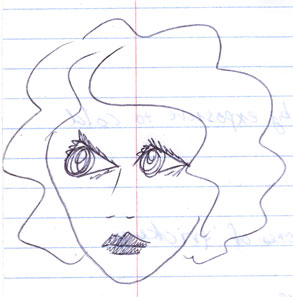 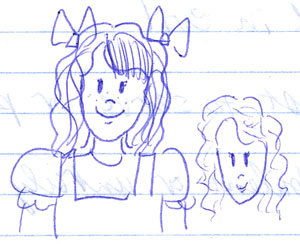 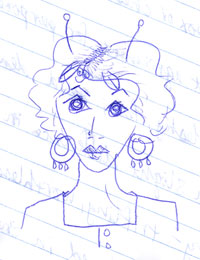 Inevitably, some time around 5:30 my six-year-old says, "Mommy, will you play a game with me?" I admit, not to my credit, that I often try to get out of it because by that time of day I am tired and hungry and I do not want to play Battleship or Chutes and Ladders while my older son, D-Mac, constantly tries to change the rules so he'll win and my three-year-old, Ducky, ignores the rules completely and bickering ensues.

But yesterday, when I asked D-Mac what game he had in mind, he said he wanted to go on a quest. Now that was something I could play along with! We gathered equipment - a rope for D-Mac, a belt for me, and invisible spikes for Ducky (raise your hands in the air, elbows bent, fingers pointing up, and say "Invisible spikes!") - and set out to face the challenges D-Mac devised. First we had to climb a crystal mountain (the stairs). Then we fought invisible ninjas, battled a lion monster, escaped from sharks, and finally climbed across a cave rigged with bombs to retrieve a flag.

Each challenge took place in a different room; we wandered around the house using whatever we found in that room as part of the challenge. There was no sitting still, no waiting for turns, and we got to make up the rules as we went along (within reason - D-Mac still tried to change his own rules when things didn't go his way). By the time we'd captured the flag it was time for dinner.

I'm looking forward to going on another quest today.
Posted by Susanna at 5/24/2012 No comments: 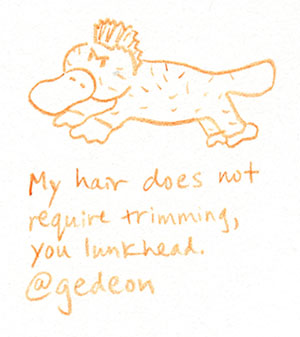 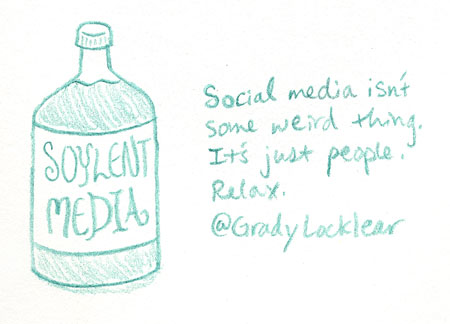 I Don't Have Time for Art 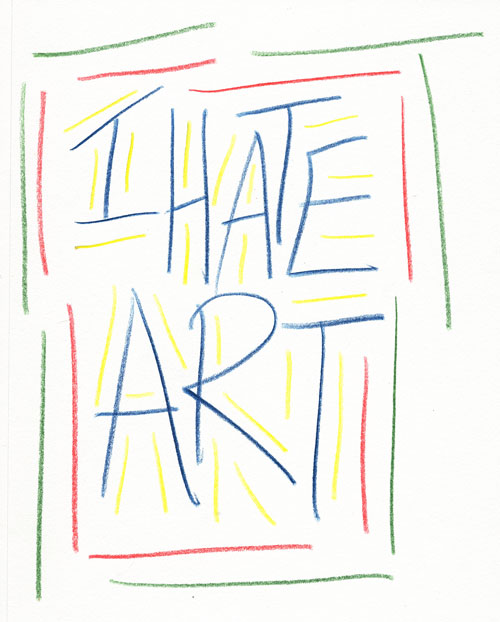 OK, so I don't really hate art. But this was my first reaction after listening to that damn Spoleto promo on SCETV radio for the 100th time. Because sometimes I just cannot bring myself to care about art and culture and things like that. I have deadlines to meet. I have a messy house and kids to feed and laundry to do and my roots are over an inch long and the chances of making it to the salon this week aren't looking good.

Art has its place. I even believe that art is an essential part of what makes life worth living. But just because it's important, doesn't mean I can sacrifice everything else to make time for it. Art is just going to have to come to me, because I can't spare the time and energy to go find it.
Posted by Susanna at 5/22/2012 No comments:

Email ThisBlogThis!Share to TwitterShare to FacebookShare to Pinterest
Labels: art

Today I'm going back to the AIA well with a few doodles from my Video Production class notes.


Apparently the class on how to use a camera was not particularly stimulating. (The cipher says "I am so bored!") 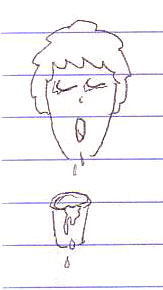 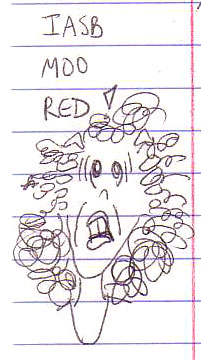 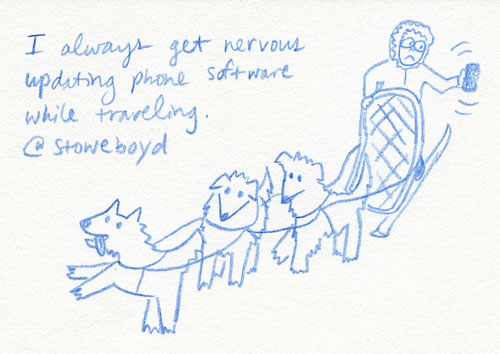 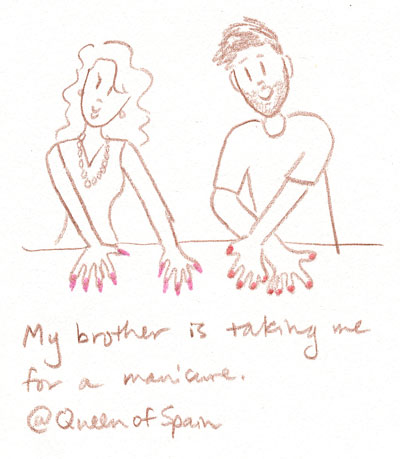 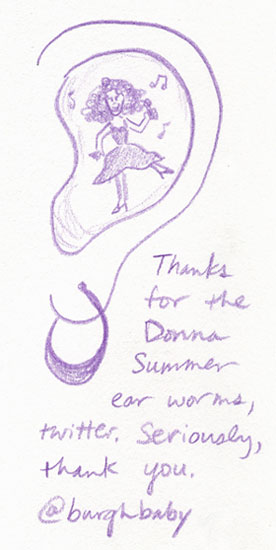 Why do cell towers have to be ugly?

I know why they are ugly: cell towers are built solely for function and cost-savings, with no eye toward aesthetics. When enough people complain about the towers, the mobile companies make a token effort at concealment by trying to disguise the tower as a tree. I don't think they're fooling anyone, do you?

But I don't see any reason why the towers have to be unattractive. If Jonathan Ives can design an attractive cell phone, if Michael Graves can design aesthetically pleasing kitchen tools, why can't someone design a cell tower that's not an eyesore?

I'll be the first to say that I'm no architect, but here are a few ideas I sketched out. 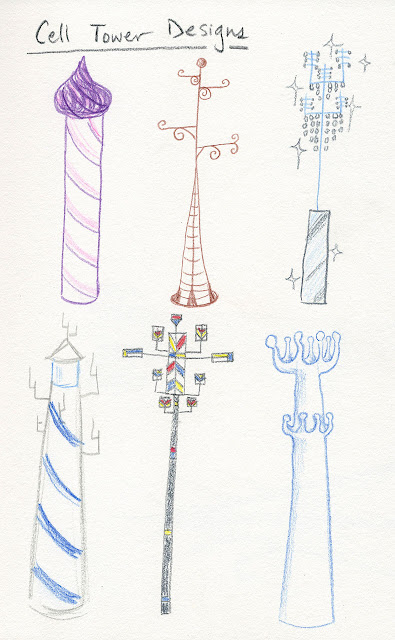 Imagine how the landscape could change if we let architects and artists partner with engineers to design cell towers that doubled as art.

Couldn't think of anything to post today, so I decided to play a little game. I went to Twitter and picked a few recent tweets that were just statements - without links - from people I follow. Then I took those tweets completely out of context and illustrated them thusly. 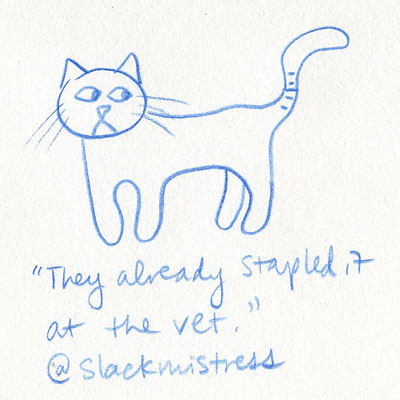 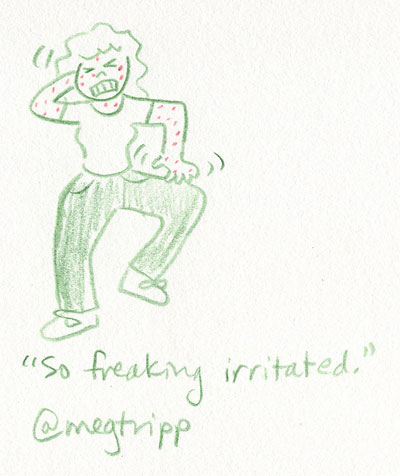 Here's another game that my siblings and I used to play, which I now play with my own children. My boys are 6 and 3, but my sister and I still used to play this game in high school.

Equipment: paper, something to draw with

For a variation, decide what everyone needs to draw: animals, spaceships, houses, food, etc.
It can also be fun to have each person use a different color of marker or crayon so that you can see which part was the original scribble.

Here are a few examples from a recent game I played with my boys. 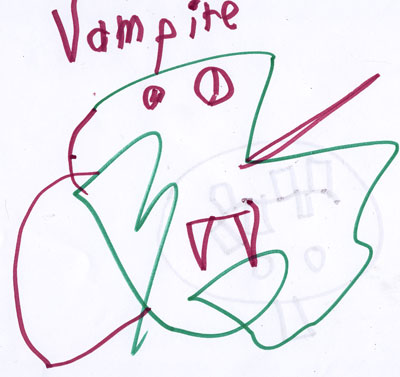 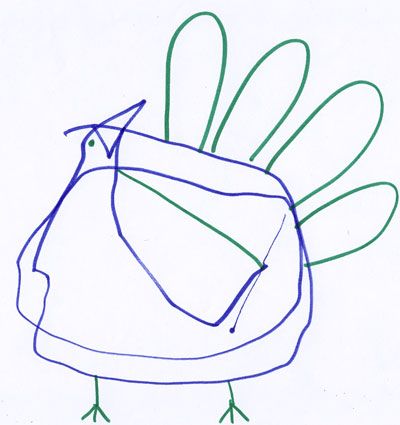 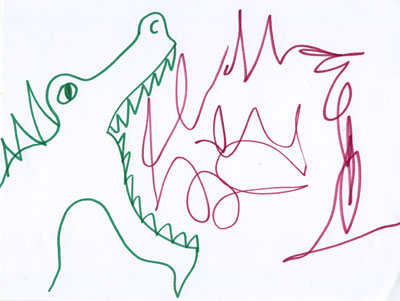 My Favorites from NaBloPoMo This Week

Here are a few of the posts I enjoyed this week from other bloggers who are participating in NaBloPoMo:

Email ThisBlogThis!Share to TwitterShare to FacebookShare to Pinterest
Labels: NaBloPoMo

If you look at my Deviant Art gallery, you'll see that I enjoy experimenting with Photoshop collages. Recently, I discovered Scottish collage artist Astrid Maclean, whose creations I can only aspire to imitate.


While trying to make something in Astrid's style, I discovered a nifty technique for distressing type. Here are examples using both script and serif fonts. In my example, I'm keeping the text in black and white because step 6 doesn't work well with colors. You can always color the text after you're done messing with it. On the other hand, if you want to stop at step 4, use any color you like.
If you make something using this tutorial, please post a link in the comments. I'd love to see your creations!
Posted by Susanna at 5/12/2012 No comments:

Today's doodle comes from a Sunday school handout from a couple months ago. We've been studying Martin Luther and the Protestant Reformation, but I don't think that has anything to do with this doodle. Rather, I think my subconscious was channeling Berke Breathed. My mom used to tell me a story about how she and her two sisters liked to play the board game Clue:

Years later, my mom became a teacher. Her middle sister took off for Japan, and still lives there. Her youngest sister has a house filled with a beautiful collection of antiques.
Posted by Susanna at 5/10/2012 5 comments:

Back on the Blogging Wagon

So much for posting every day during this month! But a couple of mistakes shouldn't mean abandoning the whole project. I've just got to take a deep breath and get back on the blogging wagon. After all, it's a fun place to be. 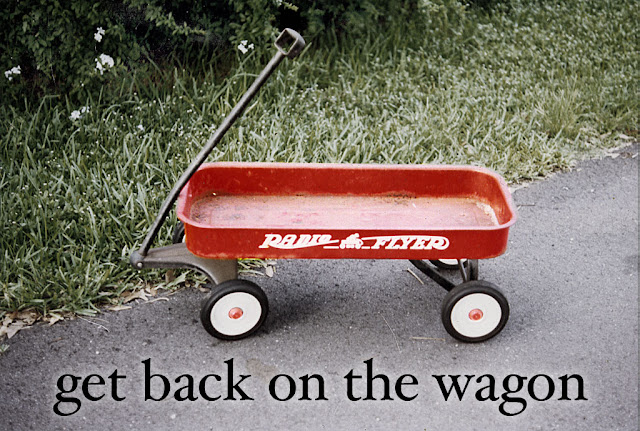 I'd like to welcome all the new readers who clicked over here from BlogHer's NaBloPoMo pages. Every Friday, I share some doodles from the margins of old school or meeting notes.

Today I have more doodles from my Gem Lakes Recreation Association meeting notes. ("Recreation," see? It works with the NaBloPoMo theme of "Play"!)

Toys, Then and Now

Thinking about this month's NaBloPoMo theme, "Play," has gotten me thinking about how the way my kids play is different from how I played as a child. Of course, I was a girl who mostly played with my sister, so naturally there would be some differences between how we played and how my two boys play with each other. But the more I try to think of differences, the more similarities I seem to find.

Thirty years after my childhood, I notice they like a lot of the same things I did:


Advances in technology (not to mention cheap overseas labor) have given my children wonderful toys to play with. But in the end, the way they play with them is really not much different from how I played with my low-tech, non-sparkly, non-speaking toys. The toys still require imagination to make them work.
Posted by Susanna at 5/03/2012 No comments:

Before there was Lego Creationary, my brother, sister and I used to play a game we called "Handful." Now that I have kids of my own, I've taught the game to them. Here's how to play.

Equipment: A big tub or bag full of Legos.

Basic game: Each player closes his eyes, reaches into the tub, and grabs a handful of Legos. He has to build something with whatever he's ended up with. When both players are done building, they have to explain what they've made.

Variation 1: The players all agree on what they're going to build (car, treehouse, washing machine) before they grab their Legos. This can get really fun and creative. For example, when you have two minifigs, a wheel, and a tree and you need to build a submarine.

Variation 2: Each player gets to tell another player what to build before they grab their Legos. This makes the game a little more competitive. My six-year-old likes this version of the game.

Why am I posting on a Tuesday? Because it's May 1, the first day of NaBloPoMo. I decided it's time to reach out to a wider community through my new blog here, so I'm participating.

BlogHer does this every month, and every month has its own theme. The theme for May is "Play." I've made a nifty blog badge here, which you are welcome to use if you are also participating. 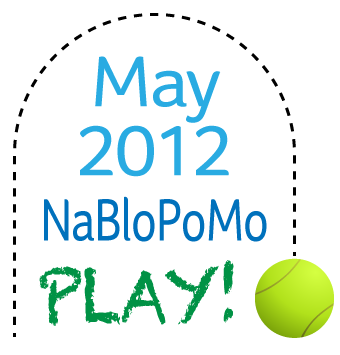 And here's the small version I'm using on my own blog: